The world premiere to commemorate the victims of the Holocaust

On Tuesday, January 29, at 6 pm, the event dedicated to the International Holocaust Remembrance Day will be staged at the Church of Sts Johns in Vilnius. It will feature the Lithuanian premiere of oratorio Night of the Holocaust by Leib Glantz (1898–1964), a Ukrainian-born Jewish composer of religious music, writer, educator and Zionist leader, in the performance of four choirs, symphony orchestra and soloists. The music was recomposed and arranged for choirs and orchestra by American composer Joseph Ness who has put 20 sacred compositions by Glantz into a seamless monumental work. The dramatic thread running through all those works was still further reinforced by adding spoken passages from the book Night by Nobel Peace Prize Laureate Elie Wiesel.
The project is the fruit of an international team of performers, including three vocal soloists – cantor Daniel Mutlu (New York), soprano Helena Goldt (Berlin) and actress Elzė Gudavičiūtė (Vilnius), as well as three instrumental soloists – violinist Rita Schteinfer (Israel), cellist Girgoriy Yanovski (Israel) and oboist Ekaterina Bergstedt (Sweden). Maestro Arkady Feldman (Russia) will conduct the Kaliningrad Symphony Orchestra and four international choral ensembles: the Kaliningrad Musical Theatre Choir, the Youth Chamber Choir „Cyrillic“, the Moscow Jewish Male Cappella and the State Choir “Vilnius”.
“The aim of this project is to commemorate the life and work of Elie Wiesel (1928–2016), a Nobel Peace Prize Laureate and famous American writer, whose shocking memoirs of the Holocaust will be read during the performance of wonderful music by famous Jewish composer Leib Glantz. In his book Night, Elie Wiesel recounted his experience as a 15-year-old survivor of the Auschwitz, Buchenwald and other death camps. We, the people around the world, must stop the deep-rooted hatred. If we fail to do this, we may end up in new genocides, human deaths and terrible suffering,” says Jerry Glantz, Leib Glantz’s son, initiator and co-organizer of the project. “The story told in Wiesel’s Night is shattering and atrocious beyond measure, but the music radiates optimism and hope.”
The International Holocaust Remembrance Day is an international memorial day on January 27, which has been commemorated since 2005 as designated by the United Nations General Assembly Resolution. It came after the Assembly’s special session, during which it marked the 60th anniversary of the liberation of the Nazi concentration camps and the end of the Holocaust. Elie Wiesel’s first book Night (1960) gives perhaps the most powerful account of the atrocities against Jews during World War II, which now ranks as one of the bedrocks of Holocaust literature and an extraordinary memorial to all Jewish survivors of the Holocaust.
The night before the Night of the Holocaust will be premiered in Vilnius it will be presented to the audience at Kaliningrad’s dome. The organizers of the project plan to stage performances of this work in ten countries around the world.
The event is organized by the Association for International Cooperation and Tolerance (Germany) and the non-profit organization “Night” Holocaust Memorial Project (USA). The Lithuanian premiere was organized in collaboration with the concert institution State Choir “Vilnius” and in partnership with the Lithuanian Jewish (Litvak) Community. 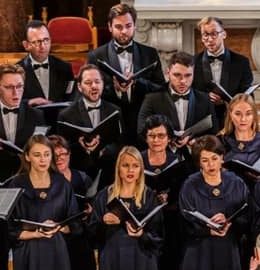