The culmination of this Festival edition was the inauguration ceremony of Vilnius Carillon. The Dominican brothers’ initiative was successfully completed on 6 September; following the opening concert of St. James Festival, one of the most modern carillons in the world made its debut attracting hundreds of Vilnius’ residents and visitors around the Church and in the adjacent Lukiškės Square. The new work by Giedrius Kuprevičius, The First Touch, was dedicated for the special occasion.
The intense sacred music programme spanning from 6 September to 4 October included thirteen concerts not only in Vilnius and Kaunas, but also in small towns of Vievis, Videniškiai and Šalčininkai.
Beside performing classical works, the Festival’s guests, MOSAIC Chamber Choir from the UK (principal conductor Ben Gaughran) and Schola Cantorum Choir from Norway (principal conductor Tone Biance Sparre Dahl), introduced our audiences to less-known oeuvres of their local composers. Šiauliai State Chamber Choir POLIFONIJA (leader and conductor Tomas Ambrozaitis) presented a programme, which predominantly consisted of Lithuanian music; Šiauliai Boys’ and Youth Choir DAGILĖLIS (leader and conductor Remigijus Adomaitis) shared with the Festival audiences best loved highlights of choral music. The Festival’s hosts, VILNIUS Choir, presented a total of four programmes proving once again the group’s versatility.
Reviews:
https://www.15min.lt/kultura/naujiena/renginiai/sostineje-suskambo-unikalus-instrumentas-29-526268
https://lietuvosdiena.lrytas.lt/aktualijos/2015/09/06/news/pirma-karta-skambejo-vilniaus-karilionas-3070366/ 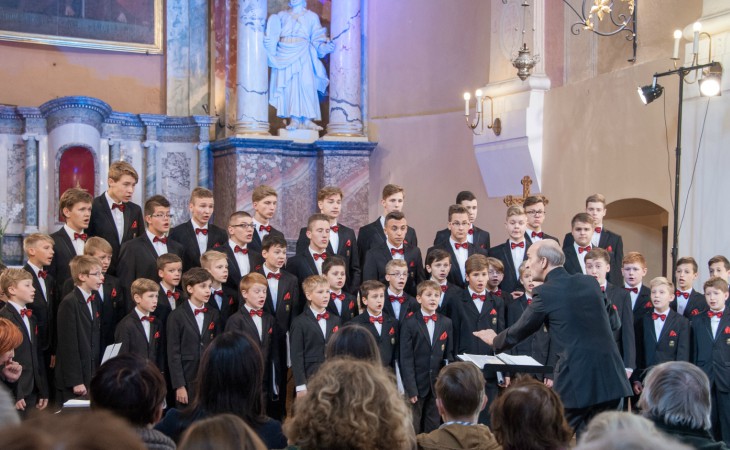 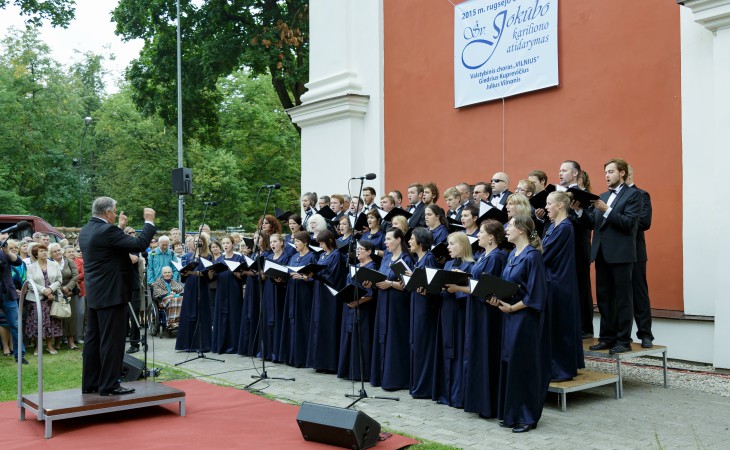 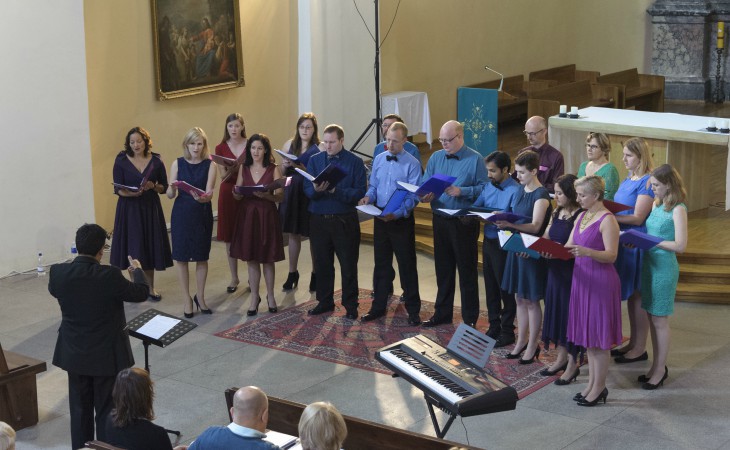 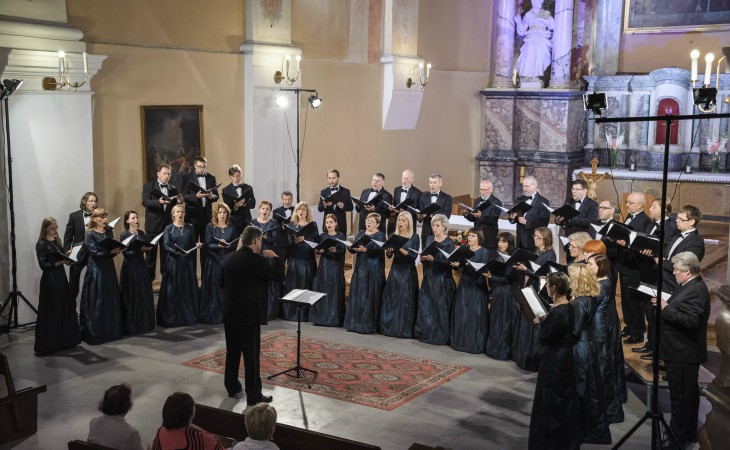 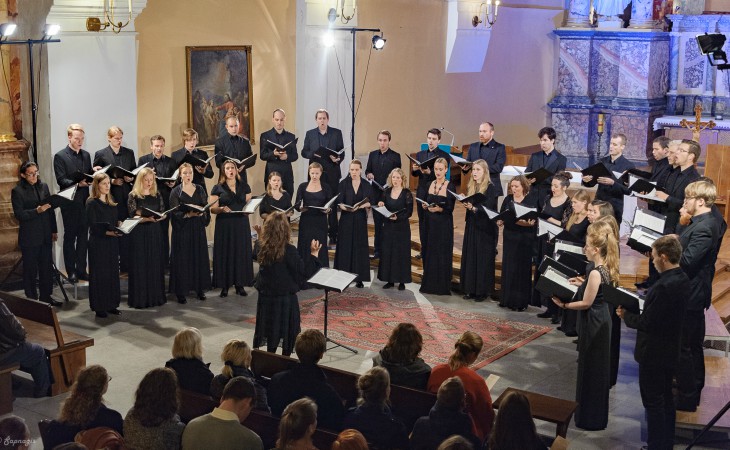 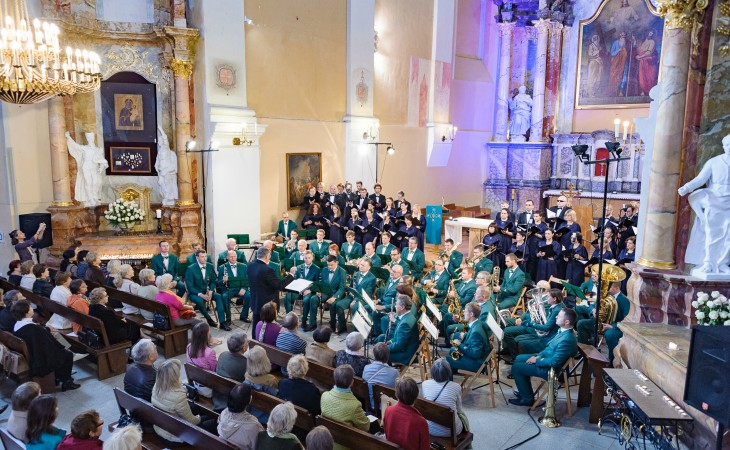 The program of the Vth st. James festival

Choir Vilnius is on of the most mature and strongest choirs in Lithuania. It is the innovative, flexible, creative, highly artistic and one of the most prominent concert groups of today’s Lithuania, which raised a number of talented professional singers and prepared dozens of programmes. The choir develops activities mindful of the Lithuanian culture by offering the audience the most beautiful moments of choral music performance. In cooperation with the famous Lithuanian performers, the choir annually organises more than 70 concerts, where one can hear the works of different styles from all the eras: from the tunes of the ancient music to the popular dissonance chimes and complex modern music.

Since the beginning of creation of the choir, the group has been directed by Rimantas Zdanavičius (1970-1976), Antanas Jozėnas (1976-1992), Jurijus Kalcas (1992-2001), Povilas Gylys (2001-2015), and as of 2015 by Artūras Dambrauskas. Fifty professional singers, who completed the choral conducting and choral singing studies, are singing in the choir. The vocal singing skills are taught by Asta Krikščiūnaitė, the laureate of the national awards, while the pianist Dainius Jozėnas accompanies the choir during the concerts.

Mosaic is a lively group of singers based in Woking, although they travel from all over Surrey, Hampshire and London for rehearsals. Their blend of musical expertise, ranging from music graduates, ex-Cathedral choristers, operatic soloists, to members of dance bands and highly experienced choral singers, enables us to perform music from a wide rande of genres.

Mosaic aims not only to perform to a high standard but also to entertain their audiences. They sing music from Renaissance to the present day, both secular and scared. Composers range from Tallis to Tavener, Bizet to The Beatles and beyond. In addition their concerts are often interspersed with vocal and instrumental solos performed by some of the talented musician in the group.

Schola Cantorum has had a high ambitions throughout its exictence. The chamber choir has built an international reputation and made a trademark of including newly written music in its programmes. Today Schola Cantorum is one of the leading chamber choirs in Norway. Almost all choir singers have higher music education.

The choir’s purpose is two work towards as high an artistic level as possible for an amateur choir. Founder Knut Nystedt (1915-2014) started Schola Cantorum ar the music department of the University of Oslo in 1964. His own music became a vital element of Schola Cantorum’s repertoire.

Tone Bianca Sparre Dahl has been Schola Cantorums conductor since 2002 and was also director of the Norwegian Student Choral Society for a period. Tone is currently an Associate professor at the Norwegian Academy of Music and teaches at the music deartment of the Waldorf Schol in Oslo. She regularly receives invitations to appear as a guest conductor and seminar holder in Norway and abroad. She is a treasured speaker on the subjects of communication and choral work, and has written a book on these subjects: The Choir. Singing – Leading – Communicating.

Šiauliai boys’ and youth choir Dagilėlis is one of the most prominent groups performing in this genre in Lithuania. Dagilėlis annually organises dozens of concerts. Hundreds of people in the audience applaud the choir in various Lithuanian and foreign concert halls. Young singers enchant the hearts of the audience with emotional performance, delight them with excellently performed music and clear voices. The contribution of Dagilėlis choirs in to the culture of Šiauliai and life of Lithuania, cherishing of the traditions of choral singing and representation of the Lithuanian choral art abroad is awarded by the letters of acknowledgement of the Presidents of the Republic of Lithuania, diplomas, nominations by the Lithuanian Folk Culture Centre and the World Lithuanian Song Festival Fund Golden Bird (Aukso Paukštė). The choir received the “Our name – Lithuania” special award for fostering the traditions of the Lithuanian Song Festival, which is included on the UNESCO list of non-moterial heritage.

In 1990, Šiauliai boys’ and youth choir Dagilėlis was created and is currently directed by Remigijus Adomaitis. Dagilėlis promotes the name of Lithuania in the prestigious concert halls in Europe, United States of America and China. This is the only Lithuanian group, which performed in the State Heritage of Saint Petersburg (Russia), Berlin State Opera Unter den Linden (Germany), Kimmel Centre for the Performing Art in Philadelphia (United States of America), famous Maria Laach Abbey (Germany), and the prestigious Beijing Grand Hall of the People (China).

Last year, Šiauliai state chamber choir Polifonija celebrated its 40th year of existence, and is one of the oldest professional choirs in Lithuania. It developed from a vocal ancient music ensemble founded by conductor Sigitas Vaičiulionis. Later the choir was named Polifonija and received the status of a professional group. Since 2011, the group is directed by Tomas Ambrozaitis.

The state wind instrument orchestra Trimitas is the flagman of the Lithuanian wind orchestras going through its 59th season. The orchestra cooperates with the famous Lithuanian and foreign performers, composers and conductors ensuring the highest performance level, culture and traditions of wind music performances. This is a versatile group performing classical, modern sacral, popular, jazz compositions, and works of the world and national composers. Director – Deividas Staponkus, principal conductor – Ugnius Vaiginis.