Enthusiastic, professional, exuding a special spiritual quality, St. James Festival is returning to Vilnius together with the arrival of autumn on 4 September – 15 October to warm up Vilnius’ residents and visitors with the sound of sacred music. This year has been special for the Festival’s hosts, Dominican brothers of St. Apostles Philip and James Church, who celebrate the 800th Anniversary of the Order.
The Festival featured not only the leading Lithuanian professional choirs, orchestras and soloists, but also the Student Choir of the Belarusian State Academy of Music (led by I. Bodyako), which fascinated the audience with its high artistic standards. Apart from its hosts, VILNIUS Choir, the Festival attracted a wide range of participants including Vilnius University Schola Cantorum Vilnensis (led by Romualdas Gražinis), the Lithuanian Armed Forces Headquaters Band (led by Major Egidijus Ališauskas), Šiauliai State Chamber Choir POLIFONIJA and others.
The Festival presented two premieres: the new Pastoral Mass from one of today’s most prominent and active Lithuanian choir conductors, Vytautas Miškinis, and Choir Concerto by Alfred Schnittke, which was performed by VILNIUS Choir for the first time in Lithuania. Concerts took place in the Festival’s two regular venues, the Vilnius Church of St. Apostles Philip and James and St. Francis Xavier Church and the Jesuit Monastery in Kaunas. Over five years of its existence, the Festival has become not only the main propagator of sacred music, but also one of Vilnius’ cultural attractions, enriching the capital city and other Lithuanian towns with professional performances of local and international artistic ensembles. 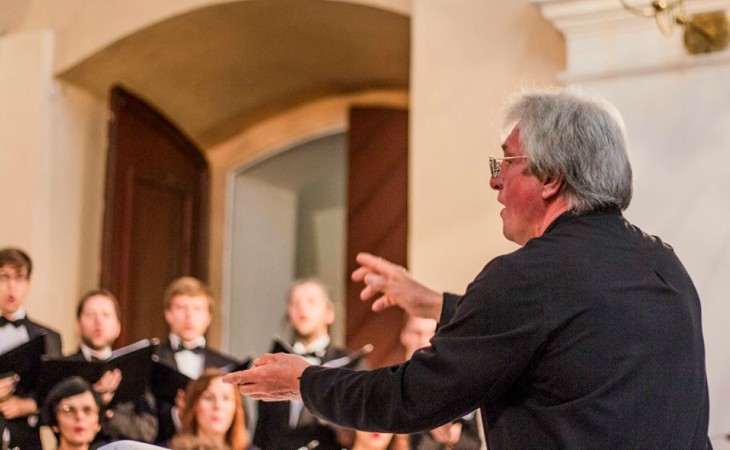 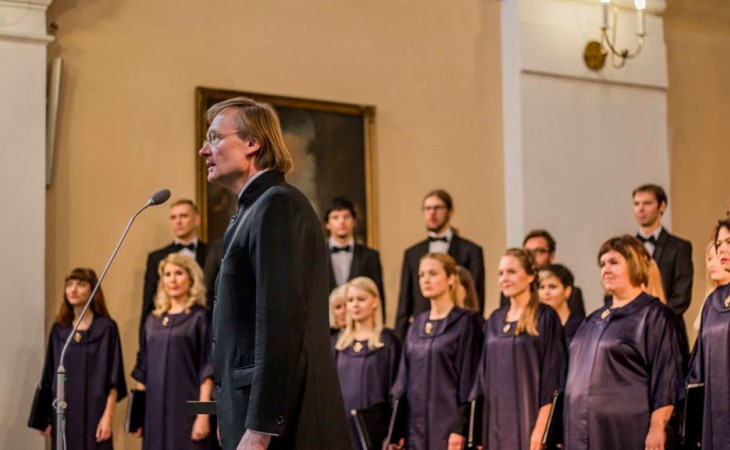 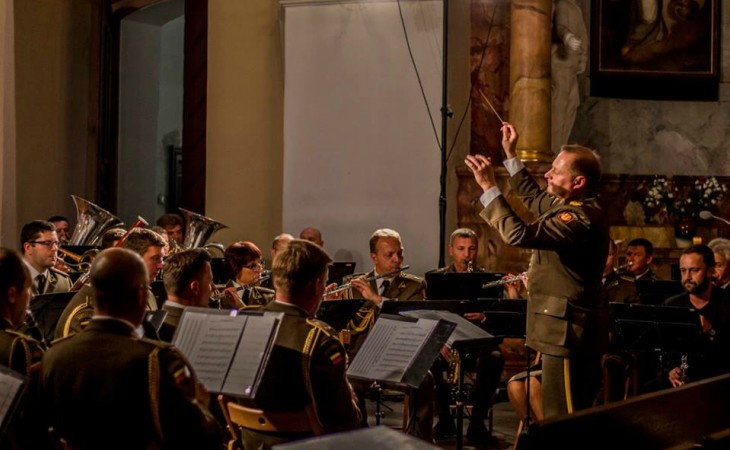 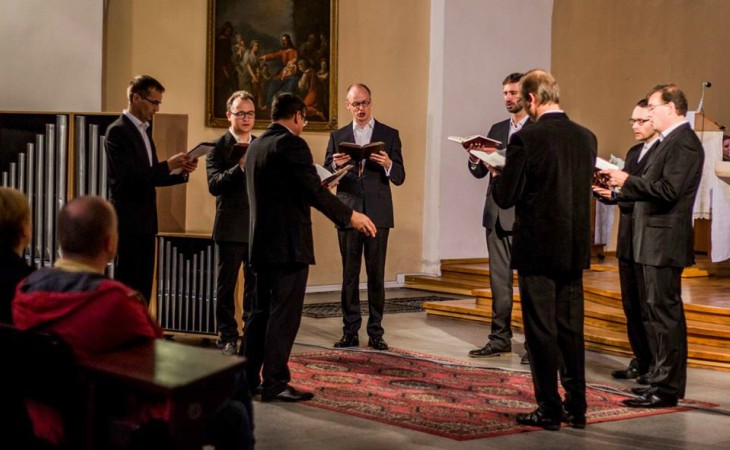 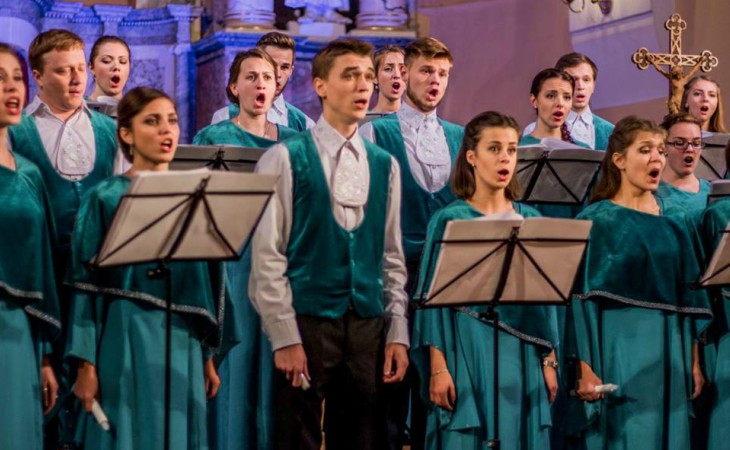 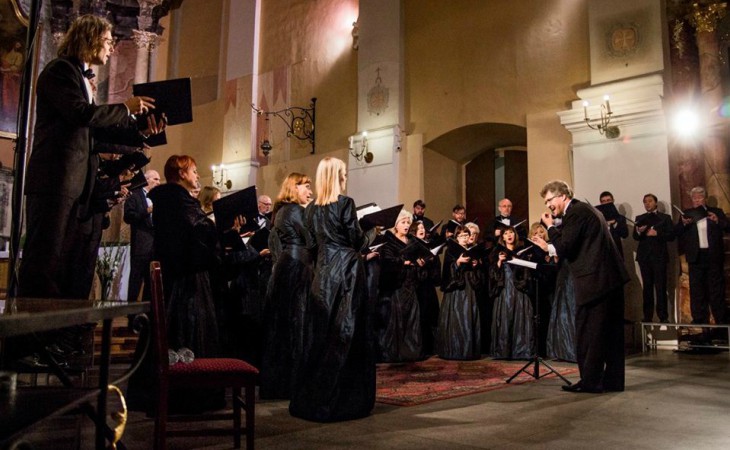 Halfway into its fifth decade of activity, the “Vilnius” choir is one of the most prominent Lithuanian ensembles specializing in choral music. Famous for its mature and artistic performances, educational activities and varied repertoire, the choir has mastered an extended fund of classical pieces from different epochs of the past. At the same time it actively participates in contemporary artistic life. On stage, the choir has collaborated with some of the most famous soloists and principal Lithuanian orchestras.
The artistic maturity of “Vilnius” was established over the years with the help of its directors, who tirelessly nurtured the professionalism of the ensemble. The current chief conductor of the choir is the famous Lithuanian chorus master and pedagogue Artūras Dambrauskas, who stepped into the position in 2015 instead of the long-time artistic director and conductor prof. Povilas Gylys. Having established new pathways in the creative life of the choir, the conductor brought in same youthful changes that promoted the artistic growth of the ensemble and allowed it to reveal its versatility even better.
“Vilnius” is paying special attention to the promotion of Lithuanian music: every year the ensemble prepares premieres of the pieces written by our composers, and the greater part of choir’s recording consists of works by Lithuanian authors.
The International St. James Festival, which has been organized since 2001, is another initiative of the “Vilnius” choir; every autumn it creates unforgettable meetings with the sacred choral music.

Schola Cantorum Vilnensis has originated from the annual Vilnius University summer academy „Ad Fontes“ in Kražiai (since 2002). The purpose of the academy has been the renewal of the studies of the sacred chant and the traditional Roman liturgy in Lithuania.
In 2006, a group of men and women started singing in the liturgical services on the regular basis at St. John‘s church of Vilnius University. Continuing the tradition of the first schola cantorum (established in 1513) of the church, as well as the city of Vilnius, members of the Schola not only perform the liturgical music during services in the traditional Roman rite, but are also engaged in the both scholarly and practical restoration of the customs of liturgical tradition of the Grand Dutchery of Lithuania and its proper Latin chants.
Schola Cantorum Vilnensis also seeks to revive the traditions of Kraziai Collegium, which was established by the Jesus society and was the spiritual and educational centre in Samogitia region of Lithuania for centuries.
Schola Cantorum Vilnensis takes an active part in the academic life of Vilnius unversity, as well as cultural events in Lithuania and Europe. In three years Schola has presented the traditional singing of the gregorian chant in such festivals and event as „Banchetto musicale“, „Pax et Bonum“, „Fundamentum collegii“, „Vox academia“, „Vilnius – European capital of culture 2009“, „National development prize” etc. 2009 Schola was invited to the renowned international Gregorian chant festival in Watou (Belgium).

Student choir of the Belarusian state academy of music

The history of the ensemble reaches back to the year 1962, when a mixed choir of students was brought together in a newly established Choral Conducting Department of the Belarusian State Academy of Music. For 45 years it was led by a prominent figure of the country’s musical life professor Viktor Rovdo, who introduced the ensemble to professional heights and international arenas. The choir achieved exceptional success and appreciaton in 1990, when it won awards in competitions hosted in Moldova, Germany, Poland and Belarus.
Since 2007 the choir’s artistic director and conductor has been Inessa Bodyako. She is a laureate of various international competitions and Head of the Choral Conductor Department, successfully continuing the work that was started by V. Rovdo. The new creative chapter of the choir is marked not only by glowing press reviews that praise the high quality of singing, harmonious sound end exceptional mastership, but also by victories achieved at prestigious international competitions in Poland, Germany, Russia, Switzrland.
The student Choir of the Belarusian State Academy of Music is actively performing both in its homeland and abroad. It was this ensemble that introduced to the Belarusian people such works as G. F. Handel’s “Israel in Egypt”, A. Schnittke’s “Reqiem”, G. Gershwin’s opera “Porgy and Bess” and other pieces. Lately the choir has been implementing the project “Pages of Choir in the 20th century” and presenting in its concerts the contemporary Polish, Swiss, Bulgarian, Latin American choral music. Singers of the choir are regularly participating in masterclasses of foreign pedagogues. Over the last decade the choir has released three CDs and two DVDs.

Polifonija is one of the oldest professional choirs in Lithuania. It developed from a vocal ancient music ensemble founded by conductor Sigitas Vaičiulionis. Later the choir was named Polifonija and received the status of a professional group. Since 2011, the group is directed by Tomas Ambrozaitis.
Broad repertoire of the choir includes compositions from the Renaissance to the present day music. The choir performed with the Lithuanian National and State Symphony Orchestras, Lithuanian Chamber Orchestra and St. Christopher Chamber Orchestra, Klaipėda State Music Theatre and Chamber Orchestra, Vilnius Sinfonietta, the Orchestra of Lithuanian Armed Forces, the State Wind Instrument Orchestra Trimitas, the State Chamber Orchestra of the Republic of Belarus, Lvov Philharmonic Orchestra (Ukraine), St. Petersburg State Symphony Orchestra (Russia), as weel as with such ensembles as Musica Humana, Academy of Ancient Music (Russia), and other prominent music groups.
Artistic director and principal conductor Tomas Ambrozaitis.