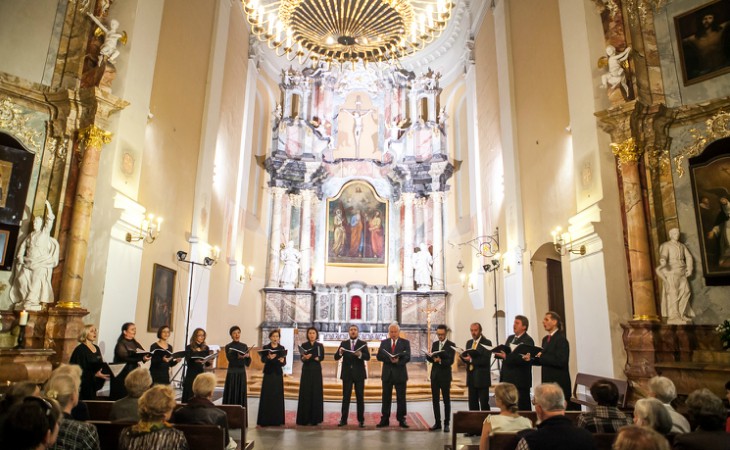 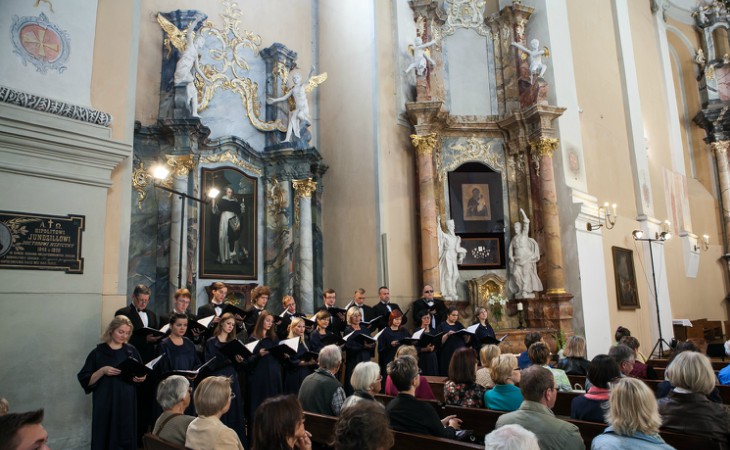 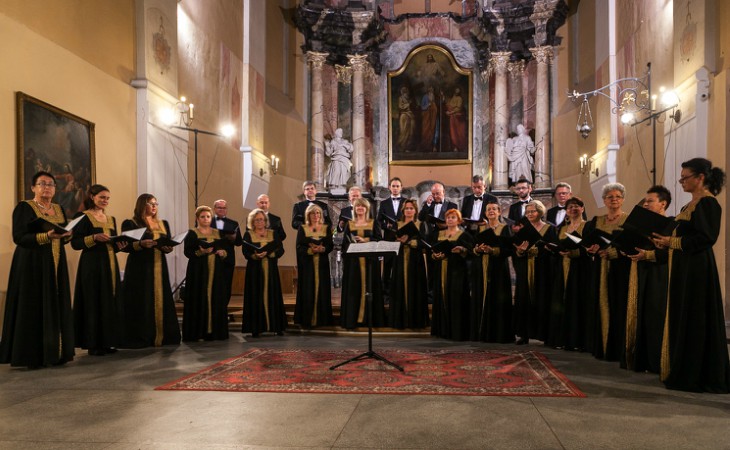 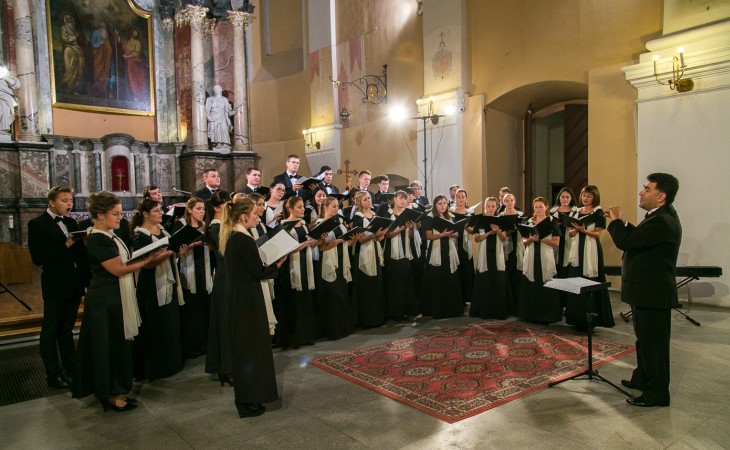 The program of the IVth st. James festival

The young and enthusiastic vocal ensemble set up by Kestutis Jakeliunas in 2010. The ensemble’s debut performance took place on 25th April, 2010, in Kaunas Philharmonic Hall during the festival called SUSITIKIME DAINOJ 2010 (LET’S MEET IN a SONG 2010).

The ensemble participated in various competitions and managed to win major awards: in 2010 during the republican soloists and vocal ensembles competition, called SIDABRINIAI BALSAI 2010 (SILVER VOICES 2010) in Vilnius, it was recognized as the best vocal ensemble and was awarded the laureate symbol – Big Stained Glass (Vitrage); in the same year the ensemble took part in the Sacred Music Competition, which was called Cantate Domino 2010 that took place in Kaunas. In 2011 at the International Sacred Music Festival in Silver Bells competition in Daugavpils city the diploma of the first degree was conferred on the ensemble.

One of the most famous Lithuanian professional choirs. The choir was founded on 31st December, 1974. It was the first concert of early music given by the ensemble, which later established a fine tradition of holding annual New Year’s Concerts. Sigitas Vaiciulionis, the conductor of the ensemble, established the early music vocal ensemble that was the only one who sang Renaissance and baroque compositions at that time in Lithuania. Since 31st January, 2011, the choir has been directed by Tomas Ambrozaitis.

The repertoire of the choir is quite extensive: from Renaissance and baroque to contemporary music, from miniatures to large choral compositions. The choir has performed with the Lithuanian State Symphony Orchestra, St Christopher Orchestra, Lithuanian Chamber Orchestra, as well as famous Swedish, Italian, Belarusian, Ukrainian, and Russian orchestras.

Ensemble was started by Prof. Algirdas Vizgirda in 1974. Musica Humana is one of the first ensembles in Lithuania that joined the revival of authentic interpretation of early music in Europe and persistently sought its creative face and style. The musicians were considerably influenced by Art Director Algirdas Vizgirda’s studies in Moscow and Paris conservatories. In 2006 Algirdas Vizgirda’s activity was awarded the Lithuanian National Culture and Art Prize.

For more than three decades of a successful career Musica Humana has developed numerous monumental projects that have been dedicated to the great German, French, Italian and English baroque composers.

was founded by prof. Leon Zaborowski in 1984. The choir is one of few choirs in Poland which specializes in performing Orthodox music composed by Russian and Ukrainian masters from 18th – 20th centuries. The choir consists of representatives of different professions. Cappella Musicae Antiquae Orientalis begun its concert activity in May of 1985.

Cappella Musica Antiquae Orientalis is a multiple winner of international choir competitions. The choir participated in many international choir festivals and traveled abroad over 40 times. A great event in history of Cappella was a cooperation with Opera Theater in Łódź. During the last 29 years the choir performed more than 460 times in Poland and abroad. The choir recorded for radio and TV stations (also video recordings). Cappella also recorded three CDs.

Choir was founded in 1956, by Stanislavs Broks (1926-1977). Since 1996 the conductor of the choir is Jevgenijs Ustinskovs. The choir is active in concert activity . It repeatedly performed in cities and towns of Latvia , Russia , Lithuania , Estonia , Belarus , the Ukraine , France, Hungary , Germany , Poland , Austria, Netherlands, Great Britian, Spain, Italy. In the repertoire of choir there are works of different styles from Renaissance to modern Aleatory . Folk and sacred music has an important place too. The choir active in co-operation with various orchestras. The “Daugava” is a one of leader choirs in Latvia.

Ensemble has for decades been a powerful voice in the Swedish and international choir community, not least appreciated for its commitment to contemporary music. The choir has with its conductor Jan Yngwe toured the better part of Europe, as well as Japan, Kuba, South Africa and Brazil, in all some thirty international concert tours.

Through the years Vocal Art Ensemble has been awarded several prizes in international choir competitions. With its many recordings and radio and TV appearances the ensemble has been lauded both domestically and internationally, for instance for its interpretations of choir music written by Russian composer Alfred Schnittke and Frak Martin from Switzerland.

2004 Jan was the recipient of one of the finest awards offered in  Swedish choir music, the Johannes Norrby Medal, for “his many years of successful and extremely qualified work as a choir conductor”.