The Choir “Vilnius” returned from the cultural mission in Sakartvelo

Between April 7 and 9, 2019, the Choir “Vilnius” gave concerts in Sakartvelo (Georgia) at the invitation of the Tbilisi International Choral Music Festival. The choir presented a programme of choral works by Lithuanian composers Vaclovas Augustinas, Eduardas Balsys, Juozas Gudavičius and Donatas Zakaras at the Batumi State Conservatory and at the Cathedral of the Assumption of the Blessed Virgin Mary in Tbilisi.
“In Sakartvelo we were met by crowded halls and rounds of thunderous applause after each piece we had performed. Even though the local culture of professional choral singing is rather young and a cappella folklore groups of male singers are still predominant, Sakartvelian audiences made an impression of well-educated and discriminating listeners. Certainly, we have treated them to choral arrangement of some well-known songs by Sakartvelian composers, such as old Georgian song Suliko performed together with the Women’s Choir “Batumi” and Doluri in the arrangement of Alexander Matchavariani, with which we concluded our concert in Tbilisi,” recalled Artūras Dambrauskas, Principal Conductor of the Choir “Vilnius”.
During its concert tour to Sakartvelo, the Choir “Vilnius” also paid a visit to the Lithuanian Embassy and continued its cultural mission by participating in memorial event at the Rustaveli (Liberty) Square to mark the 30th anniversary of the blood-shedding events of April 9 tragedy together with other choral groups from Tbilisi. The choir paid homage to the freedom fighters killed during the massacre by performing Vaclovas Augustinas’ composition based on Lithuanian folk song. The choir’s appearance itself and participation of a Lithuanian choral group in the memorial event drew huge coverage in the local media and audience in the social networks, while the Lithuanian flag brought by the choir members to Sakartvelo was raised, in a surge of emotions, next to the national flag of the country and those of the European Union and NATO.
“I’m lost for words in an attempt to describe the overwhelming feeling of unity that we felt towards our brothers of fate gathered at the Rustaveli Square. Grateful for our involvement, Sakartvelians could not let us go for a long time: they admired our costumes, took photos of and with us, spoke to us and gave their warmest wishes to Lithuania,” Dambrauskas revealed.
The organizers of the Tbilisi International Choral Music Festival stressed the significance of Lithuanian singers’ appearance at the time of great relevance to the country, commemorating the 30th anniversary of the Tbilisi tragedy of April 9. “We have been waiting for three years for this choir to arrive in our country. And it lived up to our expectations: we were greatly impressed by the choir’s professional performance and exciting repertoire. We were particularly curious and eager to hear pieces by Lithuanian composers and they fulfilled our expectations. We express our sincere appreciation to the choir, its leaders and members, for the highest standard of professionalism and congeniality, which is of great importance for us. We are very much looking forward to continuing our artistic collaborations in the future,” assured Archil Ushveridze, Artistic Director of the Festival.
The choir’s participation in the Tbilisi International Choral Music Festival was its second international trip this year. At the end of January the choir took part in the international “Night” Holocaust Memorial Project, an event staged at the Kaliningrad dome (Russia). Later this year, in November, the choir plans to present Lithuanian choral art in Germany. 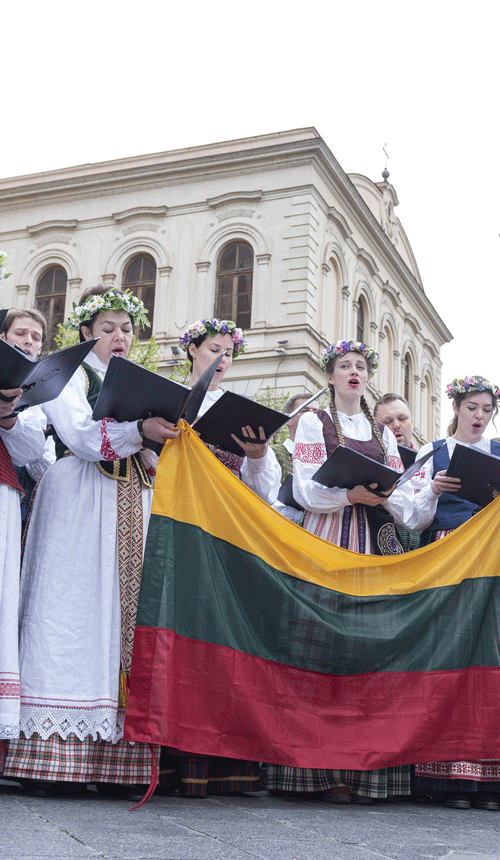